Hello there! I am Jonie Lim from Malaysia. This is the 5th week assignment for Introduction to Music Production on Coursera. This week topic is very tough for me, I'll try my best to explain how short delay effects, i.e. flanger and phaser function.

Firstly, as usual, let's listen to the original guitar sound which I have pre-recorded. Warning: I am not a good guitar player. :P 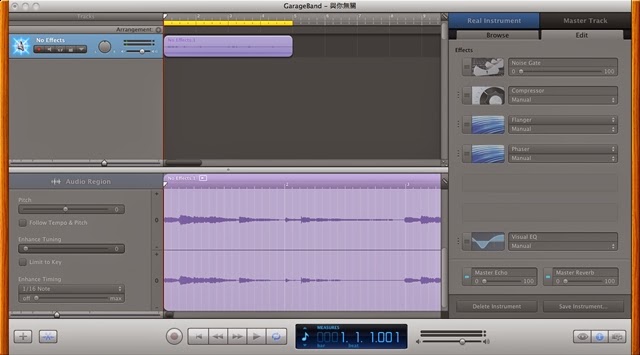 In order try to show the difference between the flanger and the phaser, I have the parameters set similarly.

Note that I have both set to the highest intensity to make sure the effect is significantly audible. Next, I set both speed to 0.5Hz. This is the low frequency used to modulate the signals. The flanger can have the feedback set to be inverted or normally here. Since the phaser cannot have it set inverted, thus I have both of them set to 50%, and the feedback of flanger is set towards normal feedback.

Next, let's look at some technical aspects of the 2 audio effects.

A flanger is an audio effect that mix 2 identical signals together, with one of the signal is slightly delayed, and it gradually changing across time, which is 0.5Hz in the sample here. It is normally controlled by a LFO (low-frequency oscillator). It produces notches like a comb filter if the signal is observed under frequency spectrum. The audio effect sounds more harmony and distributed evenly across time. This is due to the delay is applied to the signal equally.


This week's assignment, is the toughest one so far. Did quite a number of readings and re-watched the lecture videos a few times, and find myself still digesting this big topic. Guess it would be a life-long learning process. I used flanger in one of my recordings previously, I didn't literally "know" that, until doing this assignment. The only one reason I applied that effect to the guitar track was... I played it badly, and this effect seems covered the weakness a lot. :P Anyway, you can check it out at : 碎心: http://youtu.be/C4eJvkTitdc
- August 21, 2014
Email ThisBlogThis!Share to TwitterShare to FacebookShare to Pinterest
Labels: music